Due to emerge of smartphones the demand for the tablets decreased. But among the high end tablets it is much difficult to choose best among them. Apple’s iPad air, Samsung’s galaxy note 10.1 and Nokia’s 2520 were the famous release among them. Here is a quick review of the 3 devices. 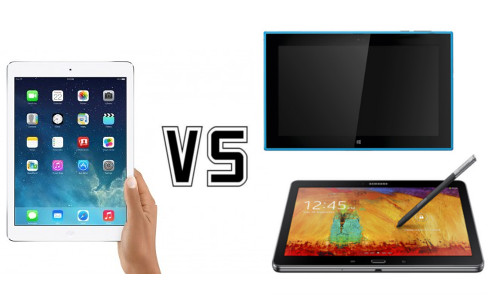 IPad air is the lightest and slimmest iPad released ever. The device comes in 2 variants, a Wi-Fi only version and a Wi-Fi + cellular version which supports both 3G and 4G connectivity. The iPad air is a 9.7 inch screen size display with an overall resolution of 1536×2048 pixels with an overall pixel density of 264 PPI. In the camera department the iPad is having a 5 megapixel camera with a flash for low light photography. The camera has all the basic features like geo tagging, HDR etc… iPad air runs on the apples latest iOS 7 operating system and has a processor 1.3 GHZ dual core. The iPad air comes with 16/32/64/128 GB of internal memory version with an on board RAM of 1GB. Over all the device is packed with all the features but the pricing is little higher than expected. The iPad air is priced about 45k INR.

Samsung’s note series was classified as a phablet series. But the latest galaxy note 10.1 can be included in the tablet family. The note 10.1 comes with different variants like Wi-Fi only, Wi-Fi + cellular and 3G/4G only. The note 10.1 is a 10.1 inch screen sized display which is much higher than the iPad air. The overall resolution of the 10.1 is 2560×1600 pixels. The screen is multitouch and can support up to 10 finger touches at a time.  The camera is an 8 megapixel one which can capture HD images and video. The secondary camera is a 2 megapixel one which is really good and capable of HD recording. The note 10.1 runs on android 4.3 jelly bean version. The Kitkat version update is on the roll. The phone has in build memory version of 16/32/64 GB with an overall RAM 3 GB. The note 10.1 is priced around 49K which is much higher than the iPad air.

The Lumia 2520 is the 1st tablet from the Lumia family. This is one of the low priced tablet among the above 2. The device is a 10.1 inch tablet which runs on the windows 8.1 OS with the tile like interface. The camera is on the lower side but really a good one. The tab has a camera of 5 MP resolution but no flash. The secondary camera of the Lumia is 2mp. The tab comes in a single variant which has both the Wi-Fi and SIM calling facility. Talking about the memory the 2520 has an onboard memory of 32 GB and can expand up to 64 GB using SD card. The tab has a RAM of 2GB. The pricing of the Lumia 2520 is pretty exciting one. It is priced around 32k INR which is really affordable who are looking for buying a tablet.