The Galaxy S series has always featured some of the most powerful Samsung devices and Samsung Galaxy S5 is the latest device in the line-up. It boasts of very impressive hardware and loads of features. The device managed to sell in impressive numbers and is still selling strong. It has been appreciated for the power it has and the features Samsung has added in this device but the design has been a disappointment. Now however Samsung has made an exception with the Galaxy Alpha. It isn’t something really radical in terms of design but is well built and has got a metal strip around the device. We put this new device against the Samsung Galaxy S5 to see how good it is. 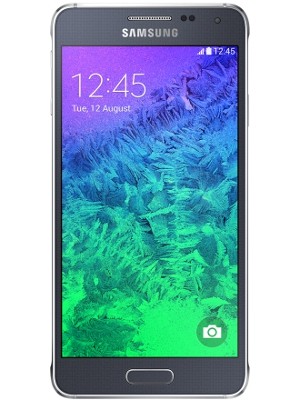 This is definitely where the Galaxy Alpha scores over the Galaxy S5. In fact the reason Galaxy Alpha is so much in news is because it moves away from the conventional Samsung design and adds some metal to the design. The built quality is pretty good. Everyone is talking highly of the new Galaxy Alpha’s design and we won’t deny the fact that it is good. The thing here is that it isn’t something top of the line. If you are expecting something like HTC One M8 or Sony Xperia Z3, you will be disappointed again (well ‘again’ because S4 and S5 were expected to have better design and built as well). No doubt this is one of the best built quality and design we have seen from Samsung in a very long time, they still have a lot of ground to cover.

Just a brief look at these two devices will tell you how different they are. S5 has got an all plastic design which is similar to at least a dozen other Samsung devices. The front face on both the devices is similar though. Even with the Galaxy Alpha, they haven’t got rid of the physical home key and capacitive keys. We really wonder why Samsung keeps adhering to this and avoids using on screen keys. Obviously with a smaller display, the Galaxy Alpha is the smaller device here. It is also very slim at 6.7 mm against Galaxy S5’s 8.1 mm. the weight difference is also quite prominent. The Galaxy S5 weighs 145 Gms and the Galaxy Alpha, even with the metal strip running around it, manages to weigh just 115 Gms.

The displays on both the devices are very different from each other. Obviously the spec sheet would tell you that the Galaxy S5 has got the bigger and better display here. Wewon’t contradict. The Galaxy S5 has got a 5.1 inch Super AMOLED display with full HD resolution. The result is a very crisp, well saturated, high contrast display with excellent viewing angles. The Galaxy Alpha’s display seems rather dull on paper when compared to the Galaxy S5. With the semi HD resolution on the 4.7 inch display on Alpha, the pixel density is 312 ppi against 432 ppi on the Galaxy S5. On top of that, they have gone for the pentile arrangement of pixels which further reduces the sharpness of the display like the display on Galaxy S3.

But there is lot more to this display than just resolution and size. In almost every other way, the display on Galaxy Alpha is better than the one on Galaxy S5. A trained eye would be able to spot these differences and an average user might not be able to notice them. The display on the Galaxy S5 has a higher colour temperature which doesn’t feel as good as the Galaxy Alpha. The colours on Galaxy S5’s display are very well saturated but they aren’t what they should be. Some colours like green and yellow are way off their position on the colour chart and you might not notice until you actually put these two devices next to each other. The Galaxy Alpha manages to replicates colours close to what they actually are.

Like many other high end Samsung devices, these two devices are also on offer in different variants. The version being sold in European markets is powered by the same Qualcomm Snapdragon 801 chipset with 2.5 GHz processor and 2 GB of RAM. However the version for Asian markets runs the Exynos chipset. In case of Galaxy Alpha, you will find the Octa 5430 Exynos 5 chipset. It runs a quad core 1.8 GHz & 1.3 GHz – Cortex A15 processor &Cortex A7 processor. On the Galaxy S5, you will find the Exynos 5 octa 5422 chipset. It has got a 1.9 GHz & 1.3 GHz – Cortex A15 processor & Cortex A7 processor. Both of them have got 2 GB of RAM. The Galaxy Alpha is available only with 32 GB of internal storage and there is no micro SD card slot. A 16GB storage is matted on the Galaxy S5 and has also got a micro SD card slot. The battery powering the Galaxy Alpha is a tiny 1860 mAh battery. This was inevitable with the slim design and low weight. The Galaxy S5 has got a reasonably big 2800 mAh battery.

The Galaxy Alpha has got a very impressive 12 megapixel primary camera. It is fast and yields some really impressive pictures. It can record 4K videos and can also record high frame rate slow motion videos. For the camera on Galaxy S5, everything is better than the Galaxy Alpha by a factor. It has got a 16 megapixel sensor and comes with phase detect autofocus which is insanely fast. The pixels also get more area on the sensor improving low light performance.

Both the devices come with a heavy price tag and judging by the specifications, they are justified. However the Galaxy S5 still seems to be a better option if we look at value. There are a couple of features that have been missed on the Galaxy Alpha. However if you are looking for a sleek design and impressive quality, you might want to consider the Alpha.

Author Bio: The author is an expert in mobile technology and loves to write about different handsets launched. He has listed the specifications  Samsung galaxy alpha for the readers to make an informed buying decision.