Micromax recently introduced another new smartphone and made it available via the online retailer Snapdeal. This new phone is the Micromax Canvas Nitro. It is an octa core device with 5 inch HD display. Micromax was the leader of this price band earlier but now it has to play catch up here. It is priced at INR 12,999 so with this price tag, it faces competition from the recently launched 2nd gen Moto G. The Moto G comes with decent specifications but the Canvas Nitro edges it with much powerful hardware. However with the Moto G you get better brand value which would definitely sit higher in priority list for a lot of people. We compare and contrast these two devices to find out which one makes more sense for you.

The Moto G retains the design elements from the previous device. You get the familiar curved removable back panel though it is a bit larger now due to the increased display size. The front is dominated by glass and it now gets loudspeakers above and below the display to direct sound at the user. This would also give a nice stereo effect when the phone is held in landscape. The build quality is decent just like the previous device. However it loses out on ease of handling as compared to the previous generation device as it is both larger and heavier.

The Micromax Canvas Nitro has got quite a simple design. The front is dominated with the 5 inch display with capacitive keys below it. The removable back feels nice to touch with its soft finish. It would remind you of the Galaxy Note 3 due to the wallet like feel and fake stitching. It is easy to remove the back panel despite the size. The power key sits on the right spine and volume rocker on left. It weighs almost as much as the Moto G so we have got the same complaint here. If one can live with the dull design, the build quality is acceptable.

The display on the new Moto G has been swapped for a bigger 5 inch display. It is an IPS LCD display with the same 720p resolution as before. This has caused a drop in pixel density of this device but still the resulting display isn’t much of a compromise. It still manages to have a healthy pixel density of 294 ppi which is easily acceptable. The display is sharp and has decent brightness levels. The contrast ratios are good as well and there is no issue with viewing angles either. It gets Corning Gorilla Glass 3 protection to save from scratches.

The Canvas Nitro has got a similar display on paper. It has the same 5 inch display size and the same 720p resolution. The display on this device is pretty good most of the times just like the unit on Moto G. The colours are vibrant and the viewing angles are excellent. The brightness levels are acceptable though the display isn’t as bright as Moto G on full brightness. Things get even worse under direct sunlight as the display is reflective and you have to find angles where you can see the whole display. They say that the display has been strengthened but there is no mention of Corning Gorilla Glass. 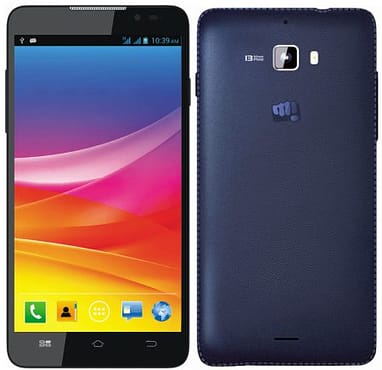 The new Moto G runs the same hardware as the previous generation Moto G. it has got a Qualcomm Snapdragon 400 chipset with 1.2 GHz quad core processor. You get 1 GB of RAM on this device and an Adreno 305 GPU just like the previous Moto G. however there are changes in terms of storage. The previous generation device was offered with 8 and 16 GB storage options but none of them offered a micro SD card slot. This time they have launched a 16 GB device with micro SD card slot. The phone has been offered with a dual SIM device and offers the usual set of connectivity options. The device is powered by a 2070 mAh battery.

The Canvas Nitro offers a much powerful hardware when compared to the Moto G. The Octa Core processor clocks at 1.7 GHz that offered along with MediaTek MT6592 chipset. It gets a Mali 450 GPU and comes with 2 GB of RAM. You get only 8 GB of internal storage but it has a micro SD card slot so it won’t be an issue. This is also a dual SIM device and offers similar connectivity options as the Moto G. it gets a bigger 2500 mAh battery.

The resolution of the pair of cameras has gone up on this second generation Moto G. the primary camera on this has now got an 8 megapixel sensor. It has got an f/2.0 lens which allows lighter and thus results in better photos. The camera interface is different from what you get on stock android but only by a bit. We have tried a lot of devices with same resolution as this and many of them have been better than this but still comparing it to the previous generation device, it is a big improvement. The front camera now has a resolution of 2 megapixels.

The camera on Micromax Canvas Nitro has a 13 megapixel sensor. While the images you get are big in size, they don’t retain a lot of details. The photos look decent on the phone itself but you see the reality on a bigger display. The white balance is not perfect either. There is a blue tint that you will observe in frames with an abundance of white. The low light performance is even worse. The camera app is interesting and comes with a lot of features that will keep you entertained.

Now here really is a matter of priorities. If brand value is important, go for the Moto G right away. It would still offer plenty of power for your everyday jobs. But if you need a really fast processor, more RAM and lot of software features, you might want to look at the Micromax Canvas Nitro.