It is a deep tooted concept that whenever compression is needed in the process of backing up a video, then there must be a certain degree of loss on video quality. Well, this can be true in the past, but no longer be true with today’s technology, like the introduction of the HEVC encoding which is able to keep the file size down 50% but double the video quality, or another technique from DVDFab which is what this article is mainly about, a solution to remove unwanted audio tracks when backing up a Blu-ray disc so that users can significantly improve the video quality but still cut down the final file size.

What users get with this technology in the end is a perfect Blu-ray backup with his wanted audio in his native language and almost doubly improved video quality. How can this be true? Yes, it is true. This new technology is so far only available from DVDFab, to be more specific, its Blu-ray copy software, and only under the Full Disc mode when users want to compress an entire Blu-ray disc down to BD 25 size, in order to save money buying the pricey blank BD50 discs, or to save free space on their HDDs or external HDDs to accommodate more data.

The centerpiece of the solution lies in the fact that it allows users to remove all the unnecessary audio tracks, so that there is much free space on the blank BD 25 disc to hold much video data, which means, less compression will be made on the video, and small compression rate means better video quality. As to why removing the audio tracks, instead of other things like subtitles, there are some primary reasons, the 1st reason is that on many Blu-ray discs nowadays there are usually a couple of audio tracks in different languages attached to the feature length movie title, which when making backups, users don’t necessarily need all of them, they just need the audio track of his native language; and the 2nd reason is that audio tracks, especially those high fidelity audios like DTS HD Master 7.1/5.1 sound, always take up a lot of space due to its huge size. So it would be very necessary to those who have a tight budgets on blank BD media to save up much free space on each blank BD disc they have just to make the most out of it, and that is why this solution is all about.

Just take an easy example, on the original Blu-ray disc of Despicable Me, there are 4 audio tracks attached to the main movie title, including a DTS HD Master 5.1 track which is in English, a DTS 5.1 audio in Spanish, another DTS 5.1 audio in French, and a secondary AC3/2 audio which is the director’s comment. To a movie lover living in the US, he does not need all the audio tracks except for the English one, so while making backup copies, he can choose to keep only the DTS HD Master 5.1 audio and ditch all the others; and to a guy from France, he might only need the DTS 5.1 audio in French…the same thing happens to the other titles on that disc. 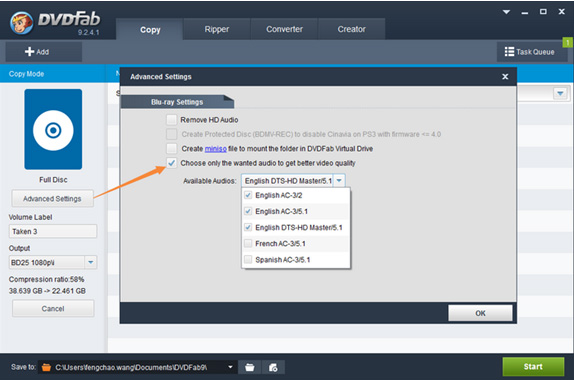 As of now, DVDFab is the 1st one on the market to offer such a solution, and it will soon be available in the next official release. Early birds who want to bite the fresh cake can now go to the forum and download the Beta version 9.2.4.3, others who have no interest in beta testing can wait a little bit longer, as the next official release is already on the way.

Attached below is a compassion picture between two full disc backups shrank down to BD25 size, with the one in the left keeping all the audio tracks, and the one in the right keeping only the user selected audios. The nominal bit rate of the video increases to 11.7 Mbps, from the previous 6.918 Mbps, a significant improvement on the video quality. 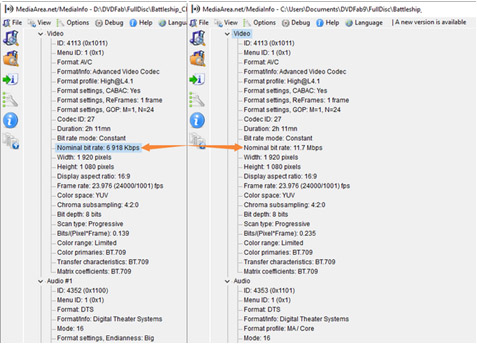