Android L- A Comprehensive Overview of the Latest Features and Developments

Google’s latest Android Software Android L has been designed and prepared for the release this autumn for Smartphones and tablets. Talks are already on about the new improvements in the design, look, feel, as well as about the improved battery experience. As the most comprehensive release, Android L is considered to be the next big thing in the world of Android with over 5,000 new APIs, pixel-perfect designs and so on. 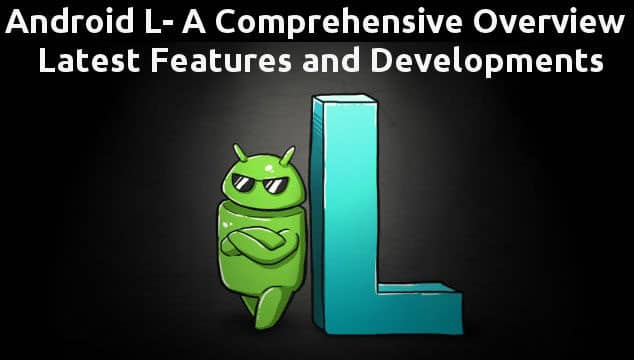 The key changes are performed on the look and feel across a variety of Smartphones and tablet device. The pixels just don’t have colors but depth as well. The material is as simple as touching a piece of paper that could transform and respond to touch. Not only this, but the designs can be reformed, expanded, and modified as the need grows.

Google has also claimed that Android L will be the fastest operating systems so far as compared to its previous versions. The system will also support 64-bit processors, directly competing the Apple’s latest devices.

Google has discovered a new design language for the Androil L, which is called as ‘material’ design. Google’s initiative for this new concept can be seen as an effort to push Android beyond the so called device category. The latest interface, which is described as “Material Design”, will ensure maximum flexibility, functionality, appearance, as well as usability.

The design will allow the developers to enjoy better flexibility to present their apps with multiple themes, colors, and patterns. With the help of responsive UI design and a variety of themes to choose from, developers will have a fun time for creating apps and thus present them with a discreet charm.

Visual elements are provided with a depthness, while shadow and light sources together create an interface that provides a memorable experience to the user. The app interfaces will now have the features for automatically generating color, based on the content and there are better animations and touch feedback system.

Google has worked on improving the notifications of Android L. Now, users will have a facility to read, open, and dismiss the notifications from the lock screen of their devices.  The software is designed in such a way that it adapts the user’s behavior, and then decide which notification is of utmost importance for them.

Google’s Project Volta has been successfully implemented in Android L in the form of an improved battery life and long lasting performance. The system comes with a “battery saver” mode that allows you to extend the life of your battery up to 90 minutes. This will specially a boon for those who remain online most of the time. The new operating system logically eliminates the battery related issues that pose a constant problem in the performance of Android devices.

A new feature called “Battery Historian”, will allow developers to display the battery use information on their applications. Plus, a new API called “Job Scheduler”, enables developers to set certain limits or conditions on their apps, so that they stop running on the background on certain situations and thus saves a significant amount of battery.

Sometimes it becomes quite daunting to find out “setting” option in an application, and it becomes even more frustrating when you do not access the app too frequently. But, in Android L- you are provided with a ‘search’ button, to find out the functions you want to access in no time.

Android L comes with a Universal Data Control feature which is centralized to the system, allowing users to analyze the way their data should be shared and controlled.

7. Personal Locking for a Better Security

Android L comes with an enhanced locking features that will enable the users to unlock their devices from Android wearable Smartwatches.

Android L will support 64-bit processor, which means developers are getting an environment for application development which is more performance oriented and user-friendly. Java based applications can be seamlessly run on 64-bit architecture without any modifications.

Android L provides a better and easier way to integrate and use Android Beam directly via share menu. Android Beam is a kind of technology that performs a key role in transferring data through NFC (near field communication).

Google’s Android L will going to be an amazing release. With its exciting features and impressive improvements, it can be said that they will make the things smoother and easier for the developers and the users worldwide.

Author Signature: Lucie Kruger is an eminent Senior Content Editor and IT consultant for Mobiers Ltd, a Mobile App Development Company. You can also contact her, if you are looking forward to Hire Android Application Developer.