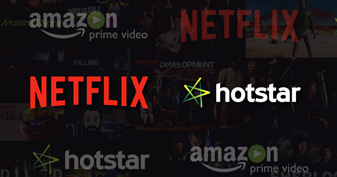 Amazon Prime Video Vs Hotstar Vs Netflix – Which is the best video Streaming?

It is very difficult to stay ahead of the curve in this age of the Internet where everything works according to the Darwinian maxim-survival of the fittest. The comparison and competition is so much everywhere that it is very difficult to decide who will out power the other. And this rat race does not seem to have any end since more and more people are becoming a part of it as if it is a part of a religious or cultural obligation. Technology and gadgets are by-products of this rat race. And now they are adding more to the competition. For example there is so much competition between these three live streaming services: Netflix, Hotstar and Amazon Prime Video. Have a glimpse at their features to understand the competition that exists among them:

Netflix is one of the most popular video streaming services that boast of allowing its subscribers to stream films and television series on Smartphone’s, digital media players, personal computers, and tablets. When you open a Netflix website, you find a featured image which provokes the audience for an immediate response by giving an idea of the new shows. Then when you further explore the website, you come across a ‘Continue Watching’ tag which helps you resume watching your favorite shows that you have watched earlier. Netflix not just only provides you these features, it also offer you a whole bundle of categories: Watch It Again, Popular On Netflix, Trending Now, Because you watched, Recently Added, and Kid’s TV etc. What Netflix basically does is that it keeps updating these categories with respect to the user’s preferences, which makes the process of video streaming interesting and dynamic.

It has three plans. One of them is the basic plan that you can watch on one screen, the other of them is the standard plan that you can watch on two screens and then last one is the premium plan with which you can watch up to four screens. The UltraHD plan is for Rs 800/month, HD plan is available at Rs 650/month and SD plan starts at Rs 500/month. It allows you to choose the quality of the video stream from High, Medium, Low, and Unlimited. The stream also stops playing back once it reaches a GB. It also lets you download the explanatory videos offline. The content that Netflix provides its users is biased towards English language, Hindi movies just seem to be an addition to the English movies or TV shows.

Hotstar is another video streaming platform. It is owned by Star India. It was launched in February 2015 and garnered more than 300 million views the same year. Since then, it is facilitating its users with video streams. When you open the Hotstar, you see a featured image which dynamically presents a blend of TV shows, movies, Live TV and premium content, each provoking a user to have a glimpse at them. Along with that, it also has a list of multiple categories including latest TV content, Popular Movies, TV shows, Must Watch Clips and Premium Content. It also provides categorizations on the basis of TV shows which is a distinguishable feature as both Amazon Prime Video and Netflix doesn’t have this feature with such effectively. Apart from that, Hotstar also offers you a plethora of information about a particular movie poster or a TV show which you do not get in Prime Video and Netflix. It also provides free streaming for TV content but charges Rs 190 for International TV content (movies, TV shows and recently released Hindi movies) which is incredible. It also provides you an opportunity to watch videos without even logging in. It also provides you an opportunity to stream free content on iOs apps, Android, and web browsers. It lets you choose the quality of videos between High (720 p), Medium (360p), Low (180p), and Auto. Its playback screen has closed captions available in English language. Just like Netflix, it also lets you download only the selected content-movies and TV shows. It covers many languages including Gujrati, Telugu, Marathi, Kannada, Malayalam, English, Tamil, and Bengali unlike Netflix.

Amazon Prime Video is another platform to stream videos online. It is operated, owned and developed by Amazon.com. This service was launched on September 7, 2006 in United States. It has garnered millions of users. People get attracted towards it’s because it provides you a mix of TV shows, movies, Live TV and premium content, with each provoking a user to binge-watch them, just like Hotstar. It has also a list of categories that include Latest TV, Amazon Original Series, Exclusive Movies, Latest Movies, Movie Genres, Kid&Family TV. It can be assumed that the categorization on its home page is better than that of Netflix and Hotstar. It also has a ‘film-strip like layout’ just like Hotstar for every category with call-to-action options like See All or See More. It allows you to watch videos on three devices at the same time just by logging in on one device, which is incredible. It has both IMDB integration as well as X-ray feature into its application giving you an insight about the real life of the characters of your favorite movie or TV show. Though it allows you to download most of the content but its downloaded videos disappear after 48 hours unlike Hotstar or Netflix. It covers languages like Telugu, Hindi, English, Bengali, Marathi and Tamil. It also adds subtitles in the regional languages so you can watch your favorite English show with any of these regional languages. Check all Web Series Reviews online here.