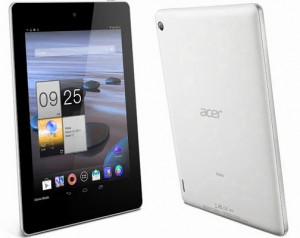 Acer an USA  PC brand which is been a leading manufacturer of computer devices after seeing the popularity of smart phone and tablet has decided to jump into the fray recently it has launched a few tab and had also tasted success .

After seeing the success story of tab they have launched another tab Acer iconia A1-810 an 8 inch tablet though it seems that ionic has tried to copy apple mini ipod design which is nothing wrong as there are many company which wants to emulate a successful model or device.

Iconia is a sub 8 inch tablet to be precise its 7.97 inch the looks are heavily inspired by Apple iPad mini the aspect ratio is 4:3 which though similar to mini is quiet subpar by today specification but it is thicker than iPad mini but the screen is LCD panel just like Apple mini the color production is not as good as mini but considering the difference in cost it’s not too bad either but sunlight visibility is not good at all and as there is no ambient light sensor hence there is no automatic brightness control so the brightness has to be controlled manually. The panel feels low cost the touch though support 10 finders but is not up to the point there is nothing outstanding about the design either and coming to weights it heavier at 410 grams.

If you use your right hand there is a chance that you might block the single tiny speaker situated at the back of screen the power and volume rocker button is situated at the top and is easy to find.

Iconic is powered by media tek 1.2 GHz quad core processor which runs on the latest Android version 4.2.2 the Ram is 1 GB and the internal memory is 16 Gb which can be extended by using micro SD card on the right side there is a micro HDMi port to connect to bigger screen for internet you can connect using Wi-Fi or usb Dongles the NFC is left out though the screen is IPS display which gives a good viewing angle the video playback is not good enough.

Out of 16GB, 5GB is taken by apps which you are not going to use you can have easy access to lock device by Acer’s Touch Wakeup feature, you can lock the device by placing 5 fingers at the top and unlock it by tapping 2 fingers at the lock screen.

Powered by lithum ion 5280 mAH battery the device last for around 8 hours which is quiet okay for 8 inch tab there are two camera in this tab a 5MPrear camera to take photo and record video and a front VGA camera for video chat the camera are basic in nature devoid if any special features the images and video produced by the camera is quiet okay but at £180 it is not bad choice.